The US-China trade war: Is there a winner?

The ongoing trade dispute between the US and China with its frequently changing targets and sentiments, has created nothing but uncertainty for the global business community. The lurking ambiguity has in-turn affected the foreign investment plans of entrepreneurs and MNCs universally.

The trade war was initiated by the US President Mr. Donald Trump who has been determined to revolt against China’s so called “protectionism” and shelter his nation from the “unfair” Chinese trade practices. US expected that the consequence of hitting the Chinese economy would be a change in the country’s trade, technology transfer and high-tech industrial policies.

With the US businesses and consumers bearing the consequence of the high-tariff imposition, the Trump administration had clearly underestimated the gravity of the trade war and the strength of its opposition. Further, China exported US$557.9 billion worth of goods to the US in 2018, which was approximately four times the amount that US exported to China in the same year.

Causes of the US-China trade war

The strong retaliation from China

From the very beginning, China responded to President Trump’s actions and vowed to retaliate against all the tariffs imposed by the US. The initial retaliation from China was to cancel all its import contracts for soybean. Thereafter, China slapped a tariff of 25% on US$16 billion worth of exports from the US. In response to US’s 2nd round of tariffs, China threatened that it would impose tariffs on US exports worth US$60 billion. The Ministry of Commerce in China had also lodged a complaint in the World Trade Organisation regarding the series of tariffs imposed by the US on the Chinese goods, claiming that the Trump-led nation violated the WTO rules that guides global trade.

Moreover, China has ample fiscal and monetary tools to cope with the impact and the Chinese government had time and again ordered to cut interest rates to enhance its domestic demand.

China now taxes a range of US agricultural and manufacturing products, such as soybeans, pork and cotton, aircrafts, cars, aluminium and steel which highly impacted US revenues due to its sole dependence on China for importing these products. As a result, the corresponding US companies are now forced to raise their prices to compensate for the same. Gradually, it might become tougher for all companies to operate and keep up with their current prices.

The conflict in numbers 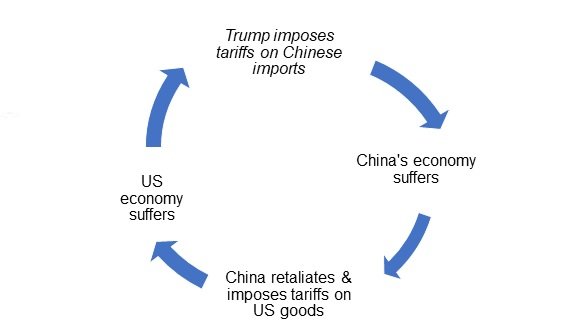 Global effect on investments and businesses

Healy Consultants Group PLC can assist your firm to relocate and/ or shift your production and supply bases from China to legally minimize the tariffs imposed on your company.

We suggest a two-pronged approach for businesses:

Solution 1: We recommend our Clients to shift their manufacturing bases and related businesses through setting up a company in either Thailand, Vietnam or Malaysia. This solution is beneficial for companies who export their products from China directly to the US. Moreover, labour force can be hired at more affordable rates in Thailand, Vietnam or Malaysia as compared to China.

Solution 2: For companies having their chief operations located in the US are recommended to setup their manufacturing bases in Mexico majorly to benefit from the i) geographical advantage and ii) free trade agreements between Mexico and the US.

The current state of the US-China trade-war resembles to a war of attrition. Neither side is ready to back down. If the war persists there could be serious ramifications to foreign trade, financial markets and businesses in the rest of the world. Therefore, a multilateral approach is needed by both the nations to seriously address and agree upon mutually beneficial trading terms.